Please note: I originally wrote this review for The Game Bolt. That version can be found here.

Syndrome desperately wants to be good. The developers over at Camel 101 clearly created the game as a love letter to titles such as System Shock and Alien Isolation. Unfortunately, despite their best intentions, Syndrome falls flat on its face thanks to dodgy gameplay mechanics, poor storytelling and a lack of scares.

Indeed, the scariest aspect of Syndrome is not knowing when it’s going to crash next. Too many times I’ve had the game crash on me after doing something simple like looking at a computer. Computers and logs scatter the map’s eight floors, containing snippets of extra storytelling and being useful to progress the game. Your mission in Syndrome is to get the ship you’re on moving again, in order to escape the terrible curse that’s inflicted upon it. More often than not, this involves you sneaking past mutated android-like things to reach a certain room to do something on a computer. 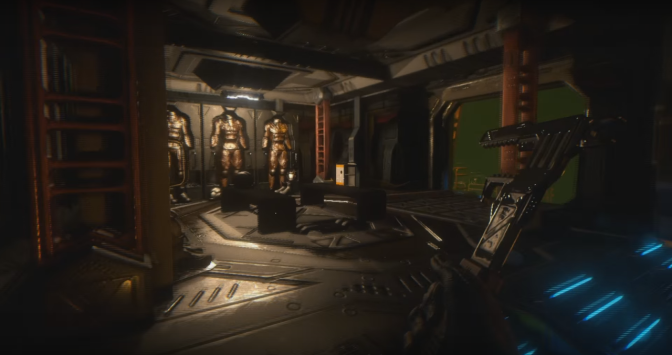 Sneaking around can get quite tense, helped by the atmospheric lighting and cramped corridors, but it is mostly tense because of the janky enemy A.I. Enemies patrol the ship’s tight corridors, waiting to get you, but you never properly learn how to deal with them. You’re meant to sneak past, but you’ll never know if you’re hidden, as different enemies react in different ways. Most will chase you if they spot you (meaning you’ll be chased around the ship a lot) and others react to sound, not their sight. This is all well and good, but it’s almost impossible to not make a sound. The corridors are so tight that you’ll open practically every door you step even remotely close to. You can wait in a corridor for the blind, but ever so evil one to walk by, but this enemy is so large that it will simply walk into you and slash your face off.

Syndrome is made very difficult by its poor design throughout. Once an enemy spots you, I’d suggest trying to leg it, but often, this isn’t too practical. You can engage in close-quarters combat with a wrench, or you can shoot them. The developers clearly don’t want you to use your firearms however, as ammo is in short supply. There are no weak-spots, either. Think a shot to the head will help take an enemy down? Think again. Too many times you are forced to go toe-to-toe against enemies with only your wrench equipped. The combat is very cumbersome. Swings of your wrench are slow, blocking barely works and the reach of your opposition is ridiculous. This approach would be fine if their were few monsters to deal with, but in Syndrome, there are many.

I understand that this is an independent game I’m bashing here, made on an incredibly tight budget and with a small development team. This doesn’t excuse it from all its faults, however. The graphics may be fairly impressive, but that’s really all Syndrome has going for it. Even then, enemy design, writing made of blood and random body parts littering the environment are more funny than disturbing. Sure, the enemies might be scarily tough to put down but they aren’t scary to look at. The awful framerate stuttering, bugs and crashes might send a few chills down your spine, though.

I felt genuine spells of dread at times however, dreading traipsing to and from the same rooms and floors constantly. Dreading the long load screens and dreading the incredibly short battery life of the torch, which you need to see the vast majority of the game. I didn’t want to play the game, not out of fear, but I just couldn’t be bothered. I stopped caring about the poorly voiced plot. I didn’t want to look at the confusing map again. I didn’t want to enter the poorly designed, overly difficult world of Syndrome again. 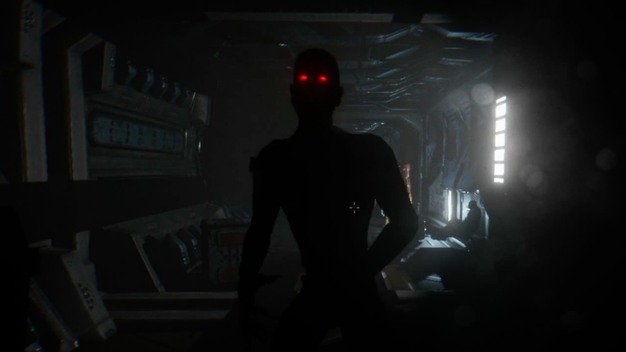 Syndrome desperately wants to be taken seriously as a quality sci-fi horror. The clichés are all there, but the quality isn’t. The game design may be scarily bad, but the most terrifying thing about the game? How much it costs. Charging £18.99 for this is ridiculous. There are far better ways to spend your money to get scared. Go watch a horror film, or better yet, buy System Shock or Alien Isolation instead. They probably cost much less than this these days.

A scarily poor game, at a terrifying price. Syndrome badly misses the mark.

The ramblings of a strange girls thoughts on anything to do with games!! have a strong love for films, comics and anime too!

The Essential Companion of Heroic Adventurers

Late to the Game Blog

A venture into the mind of a geeky middle aged blogger.

WeeBitWordy
That Was A Bit Mental

Reviews of films that are slightly less than sane

Covering gaming and movie entertainment since 2002

Miketendo64! By Gamers, For Gamers

The Casual Way to Discuss Movies

DISPATCHES FROM THE VOID
Inside Indie Gaming

The inside scoop on all things Indie